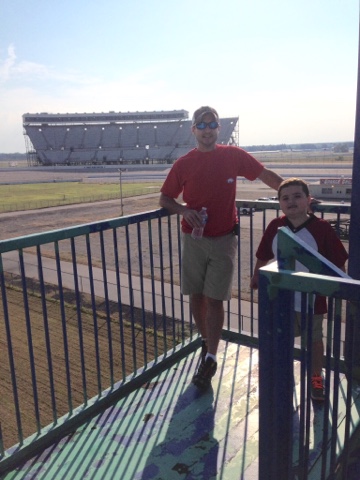 Several months ago Randall saw a $99 NASCAR experience deal online at the old Memphis International Speedway. He had me purchase it for any Saturday in September. Today was finally the day. Henry was so excited and he was convinced that he was going to be his daddy’s 1 man pit crew. He was hoping he might get to change a tire. Oh, to be a 5 year old boy. Just precious. 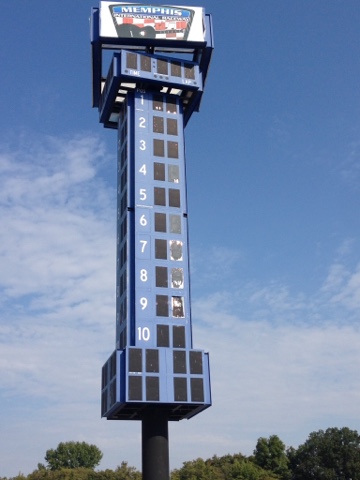 The speedway used to have several large races but now it simply houses the Rusty Wallace Racing Experience for guys and gals looking for speed. Driving up to it sort of reminded me of present day Dogpatch USA. That’s not a good thing. We found where we needed to be and felt better about the situation, thankfully. 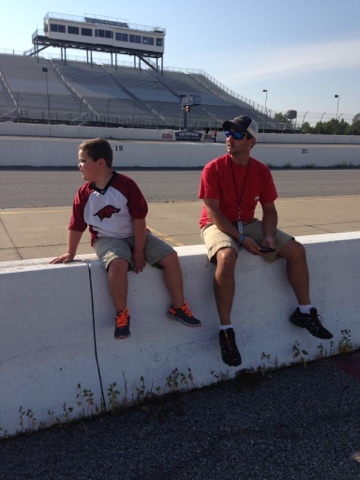 Others were already on the track driving. We stopped and observed them for a while. We were sizing up the cars hoping Randall wouldn’t get a “root beer” car (what Henry calls beer bc he has no idea what it is. He is really quite sheltered and I’m really quite ok with that). Henry wanted him to get the yellow Dollar General car. As you will see, he did indeed get a “root beer” car.

Randall had a 45 minute class to sit in. Henry and I stayed on the track watching the others who were driving. Henry tried on his daddy’s helmet as he was getting suited up after his class. Henry was none too happy to hear there was no need for him in the pit crew area. 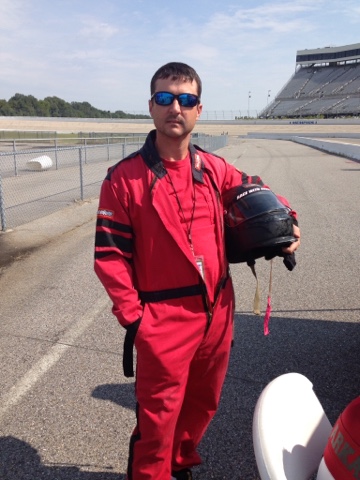 Randall chose a ride along option with a pro driver before he drove the car himself. After sitting in class and the instructor scaring them all into a pro ride along and an extra insurance policy….they were all lined up at the registration desk adding to their tickets. I said that instructor needs to come sell houses because he’s got game! Suckers. Seriously, those cars go fast and the pros are driving on the track alongside them to give them the “experience”. Not leading them like the Petty driving school…. These pros drive all around them on the track. It’s intimidating and the ride along makes them more confident. I was glad Randall got “sucked in” because it really did make him feel better about getting in the car alone afterwards. 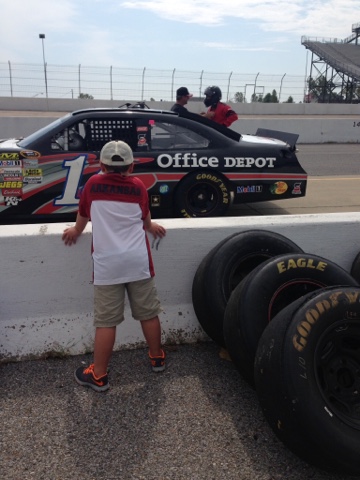 Henry loved coaching his daddy as he got in the car with the pro driver. He liked looking like he was in a pit with the tires beside him too. Henry Lee was on cloud 9 in that environment and he honestly thought Randall was on TV in a NASCAR race. He wondered who all might be watching and went down the family and friend roll asking me. I just went along with him. You are only 5 once and most daddy’s never do this or only do it once. This is the good stuff that gets stored up tight in his childhood memory bank.
( His wife will hear about this 874 times if he turns out anything like me. I replay my best childhood memories so much randall feels like he lived in Sutton Estates with me.) 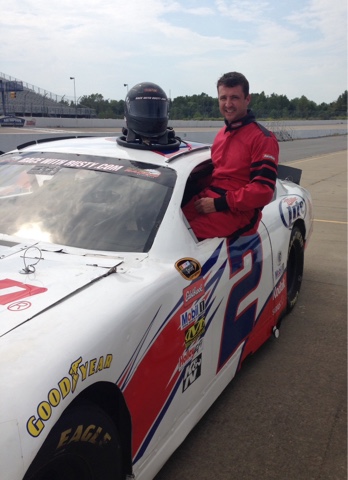 Our Big Daddy was all ready to get in and take his 8 laps around the track. I made him pose for me. He was a good sport about it. When we were newly married we watched NASCAR races on Sunday’s because we didn’t have cable and he grew up watching it on and off. I had never watched races. My daddy watched golf on Sundays and napped through it. Anyway, my cousin Hollye and her husband watched NASCAR because they wanted to and used to say they thought Randall looked like Kasey Kahne. I never really saw the resemblance but today I said “pose like you are “Kasey Kahne”. It’s a wonder he did it. I embarrass him from time to time. Can you Imagine that?!

He got secured in the car just like a NASCAR driver would. It gave me closterphobia just watching it. 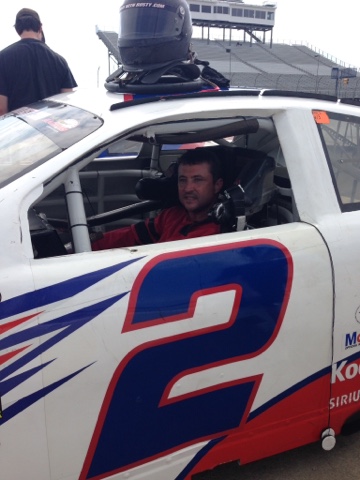 He looked like a natural. He really enjoyed it and by lap 4 and 5 he was flying on the track. Henry would wave and say “He isn’t waving at me!” And “wow, he’s really speeding!” It was fun to watch him drive. 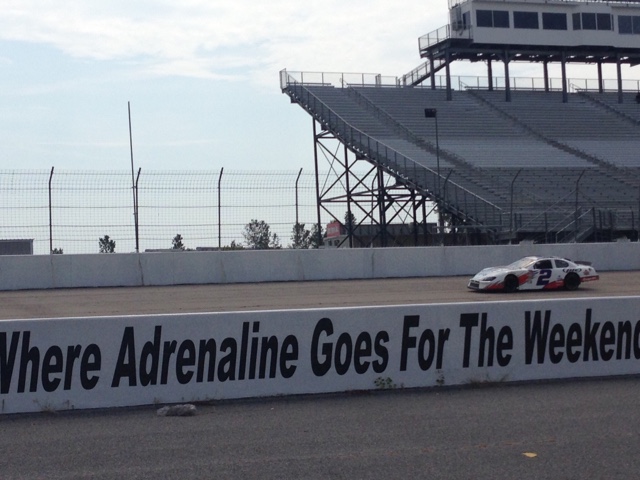 That’s my #2 in that “root beer” car, ladies. Step off! 😉
I told Randall before he drove that I really felt like I should sing the national anthem and kiss him before he gets in the car. He made me assure him I wouldn’t do either.
It was a fun experience and if your man likes speed and racing, you should give him the gift of adrenaline one weekend! 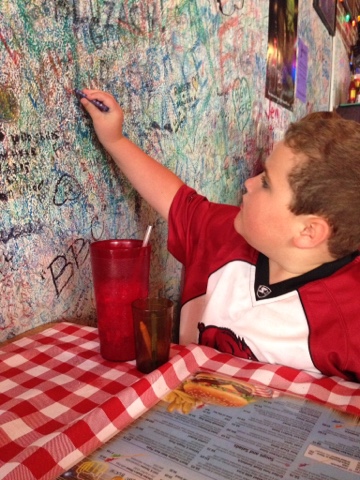 We spent 3 hours at the race track. We were hungry and thirsty. Henry asked if he could go to Huey’s and color on the wall. He said it had been awhile. So, we did. 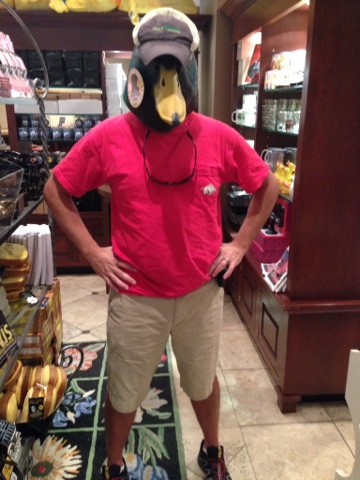 We took a shortcut through the Peabody lobby for a little A/C action. It was hot today. Randall decided to get “duck headed” in the gift shop. Henry did not care for that very much. He doesn’t do masks well. 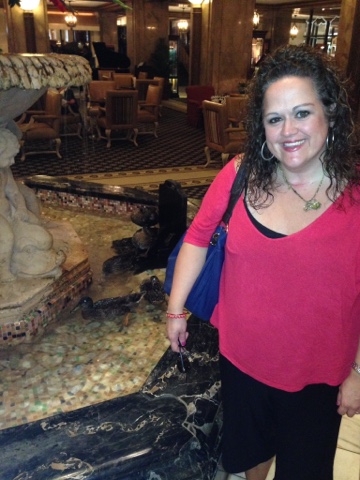 Randall snapped a picture of me with the ducks in the fountain. I posted it so you would know I was really there today because there was no other proof of that. I love my little family and the fun we get ourselves into.
Abby Jo