Saturday morning we set out to take Henry to the Fire Museum of Memphis.  He loves a fire truck just about as much as he loves chicken nuggets and red suckers. It is the best thing ever, really. The fire truck outside of the museum just so happened to be named after a man named Henry. Perfect.

“Fire!” Henry played and played in the fire trucks. He had a little coat and hat to wear while at the museum. We were there during a birthday party. Once that group cleared out and headed back to the party room we had it all to ourselves. It was the best.
I wish we lived there so we could have our 3rd birthday party at the museum. I just can’t ask our little friends to drive an hour with gas so high, pay for parking downtown, walk 2 blocks to the museum, and bring a present. I doubt anyone would come. Randall said he wouldn’t come if he was invited. He cracks me up.

All in all, it was a hit! Henry still talks about the fire trucks. He woke up Sunday morning and the first thing out of his mouth was “I drive a fire truck, Daddy!”

After the fire museum we walked down to Huey’s to eat and then planned to take Henry on his first trolley ride and head back to the truck and go home. He kept saying “I ride choo choo”. He loved it and yelled “all aboard” when it stopped at the lights. He was not happy when it was time to get off. 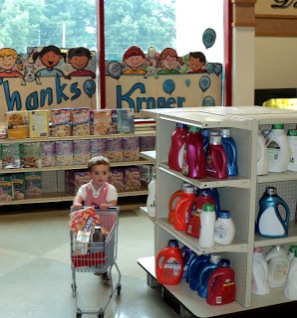 After we got to the truck Randall decided to not head back home just yet. He drove around for a bit and let Henry nap.When Henry woke up we ended up at the Children’s Museum. I am not a huge fan of it and I think Randall is finally convinced it is over-priced. They have less this spring than they did last spring. Henry had fun though. Henry LOVES Kroger. The mini Kroger was the best part of his little visit. He also loaded boxes on a FedEx plane, danced in the dance room and sat in a fire truck (go figure). 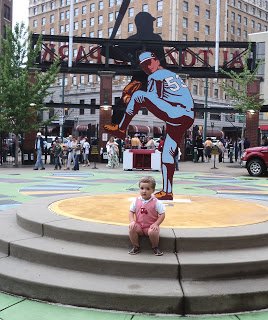 After eating dinner at the Rendezvous, we took Henry to his first baseball game. He said over and over “I want baseball.” I think he thought they were going to give him a baseball. Poor, spoiled thing!

Henry scored a Redbird shirt in the gift shop and had to put it on over his shortall. He may have been the cutest redbird at Autozone Park.

We had a full and fun day in the Bluff City. I hated not seeing my “people” while we were there but we were on a mission to cram as many activities in one outing with a 2 year old that was humanly possible. I believe we achieved our goal. He was asleep before we got to Mound City!
It reminded me so much of Samuel at this age. Falling asleep on the drive out of Memphis, headed back to nea after he did a little “root, root, root, root for da Redbirds” with Rocky at Autozone Park. He always added an extra “root”. Preciousness.

2 thoughts on “Walking In Memphis”