Santa came and came big. Before he came we had to soak up the real meaning of Christmas. We went to church on Christmas Eve and Nana and Papa came in time to go with us. We got to sing and light glow sticks…Henry loved it! He got to go in the service with us and he did great. Christmas at our new church was such a treat this year. I reflected on things I had never really thought of. I love taking away new little nuggets of truth. I always enjoy a Christmas Eve service. It puts the rest of the night and the next day into perspective.

Keeping with our Christmas tradition, we wore matching pajamas for the third year in a row. We wore Sesame Street themed pajamas this year. It was fun times. We love doing Christmas at home now that we have Henry. It is so peaceful and fun. We stayed in our pajamas all of Christmas Day. Nothing like a day in the pajamas. Those are rare for us these days. It was bliss.

Christmas with a 2 year old is fun and exhausting. Capturing him on camera is difficult these days. We were thrilled to get him sitting still looking into the camera. Marmie got him the Elmo shoes. Such a cute added touch. I sure do love this little Christmas cutie!

Because Henry was such a good boy this year Santa visited him in a big way. Santa had 4 helpers that worked hard putting it all together. Henry got his own house, mortgage paid! He also got an extra large dump truck and a work bench. His Nana and Papa gave him the Mickey Mouse bike. His stocking was busting at the seams too. Santa likes Henry a lot!

This was Henry’s reaction to Santa’s gifts. His little smile and squeal were priceless. My camera was on its last leg so the photo was really poor quality. Thankfully my in-laws saw fit to gift me with a new camera and I opened it soon after this photo was taken!

He ran to his house first. He was overwhelmed I think. I know Santa was just as excited as he was to watch his face light up.

He spotted the dump truck from his house and had to check it out. He ran to get his old one and to compare the size. He was funny sizing them up. It is about 3 times the size of his old one. I think he has pushed it into every room of our house. Poor thing is ready to play outside again. He loves pushing his trucks and filling them up with all his little stuff. He is so funny.

Next he had to check out his work bench. He will have lots of projects to work on I am sure. He loves to push the button and make the saw cut. He even tried to lick it while it was on. Randall quickly gave him a lesson on safety while at work. We might have to call Mr. Sam and have him do a safety inspection (Melissa’s husband is a safety man). 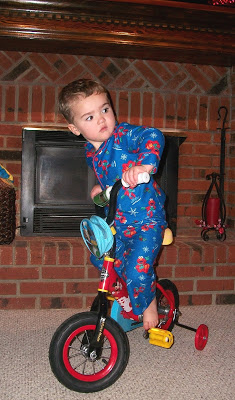 Henry loves his Mickey bike from his Nana and Papa. If he can get the pedaling down he might just ride on down the road. He loves to go!

Henry wanted us to visit him in his house. He held me hostage for a while. Daddy gave me my rations and communicated with me through the window during the stand off. Henry finally let me go and that was nice. I would let him hold me hostage in his house all day if he wanted.

Henry also had fun with our gifts. What is mine is his these days…and what is his is not mine! So true and funny. He loved climbing on the cooler his daddy got from Nana and Papa. I think he thought it was a toy box. Christmas is so fun with Henry. I love sharing the joy of the season with our baby boy.

One thought on “Santa Claus Came To Town”